Azure Striker Gunvolt is a 2D action game featuring the talents of star creator Keiji Inafune as the Executive Producer and Action Supervisor.
With the “septimal” power to create and manipulate lightning, Gunvolt faces off against the massive conglomerate known as the Sumeragi Group. Intense battles
unfold against Sumeragi's ultra-powerful adepts (those who possess septimal powers) as Gunvolt fights to keep his nation free.

This new mode gives speedrunners around the world the chance to compete for the best time,
with pre-determined settings put in place by the Gunvolt team to maximize efficiency for this challenging new mode.
Future updates which will new add features and settings are already planned,
so stayed tuned for information about that in the near future.

Use your trusty sidearm to tag enemies, then let loose a burst of electricity for massive damage. You can even tag multiple enemies and zap them all simultaneously.
Your lightning abilities are not just for defeating enemies, though. Use them to perform various maneuvers such as hovering across hazardous terrain.

Do Battle With a Variety of Bosses

Sumeragi's most powerful members, with a wide range of personalities, await you at the end of your missions.
Battles get heated as bosses unleash their most powerful skills and techniques.

Even Gunvolt falls in battle sometimes. When this happens, there is a chance that Lumen,
aka The Muse, will revive you and grant you a massive power boost. Furthermore,
if you manage to amass at least 1000 Kudos during a stage,
the BGM will change and Lumen will sing one of her songs for you for as long as you maintain those Kudos.
Your Kudos will reset upon taking damage, so keep that no-damage run going for as long as you can!

In this long-awaited mode, players will be able to play the original Japanese version of the game,
which includes ample mid-stage dialogue, all fully voiced in Japanese with English text.
The entire script has been re-translated to coincide with the dialogue of the Japanese version of the game.
To play the game in Japanese Voice Mode, select it from the Language Settings before starting the game.
Show more 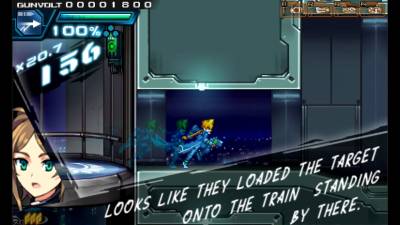 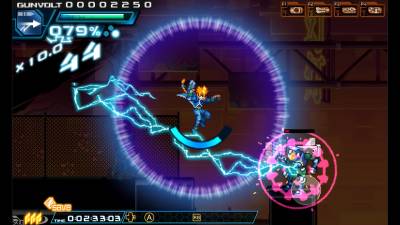 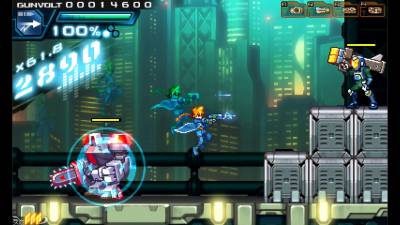 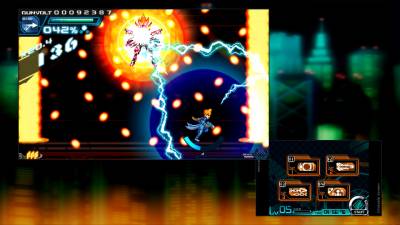